I've done a few Real and Barca repaints, but this is my first of any other La Liga side.

Here's the reason I did a season as Atletico Madrid on Fifa '98: Juninho! 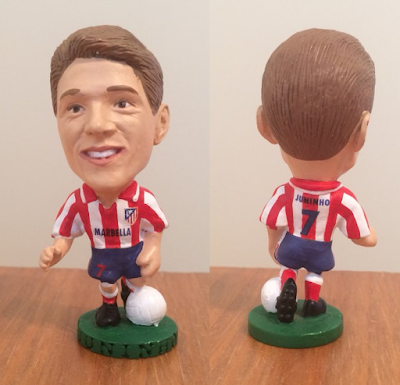 Posted by Marc's Corinthians at 06:32 No comments:

Tevez, in his Man City Days: 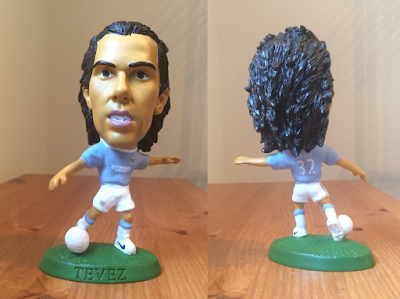 Quite a simple but effective repaint. I think the boots are a nice extra touch.

Funny story with this one is that it was originally in a Man Utd kit... the City fan that sent it to me clearly couldn't bear to have it in his house in his original colours, because all the badges were crossed out with black marker pen!!

Made me chuckle when I opened it, anyway!
Posted by Marc's Corinthians at 12:10 No comments:

Following their great win in the Carabao Cup, I thought I'd post a pic of my first ever Blackburn Rovers repaint.

This one was a gift that a friend of mine asked me to do for his son. Funnily enough for a Rovers fan, the figure we agreed on as the best likeness was Shearer... and the figure was for Alan! 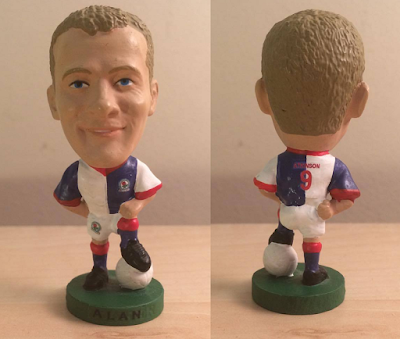 My friend was very pleased with it!

If you would like a 'lookalike' figure of a friend or relative, please get in touch! Details for Facebook and Twitter are in the header.
Posted by Marc's Corinthians at 16:44 No comments:

So, a quick look down my recent post reveals no Newcastle figures in recent weeks, so here are a couple! 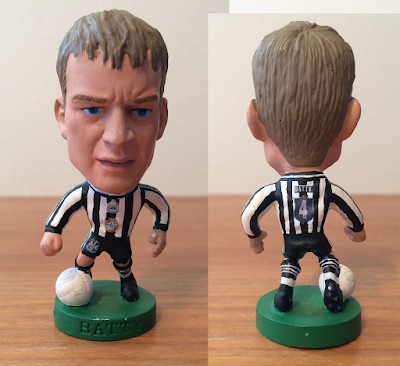 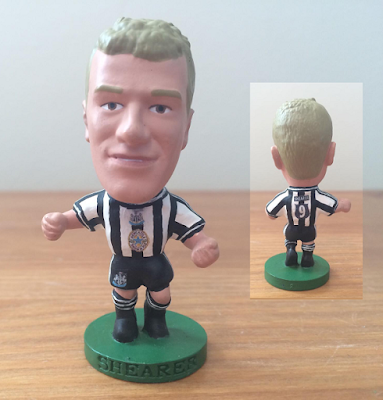 I remember at the time thinking that the shield to have the number inside was pretty smart... but it looked weird if you didn't get a number printed in it!

Loads of away kit repaints from the same season to come!

Posted by Marc's Corinthians at 04:53 No comments:

Unless I'm mistaken, these kits pretty much top and tail Des Walker's career; one is from his early days at Forest, and the other is from his swansong! 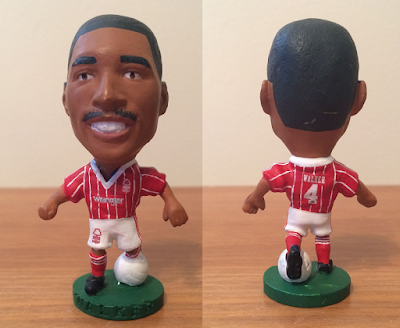 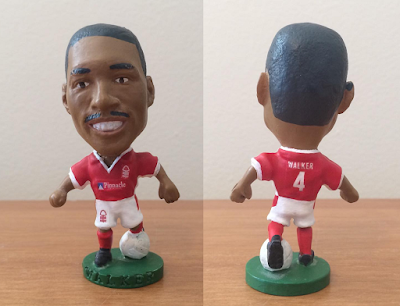 As ever, you know I'm a sucker for pinstripe kits! I also like the difference of the Umbro style number font on the first one, and the uniform Championship font on the second.

Good to see that Des retained his youthful looks!!
Posted by Marc's Corinthians at 03:22 No comments:

If you have followed this blog for a while, you'll know that I've done so many Spurs players, that I've pretty much lost track of which ones I've posted here.

So, if you've seen these before; Sorry!! 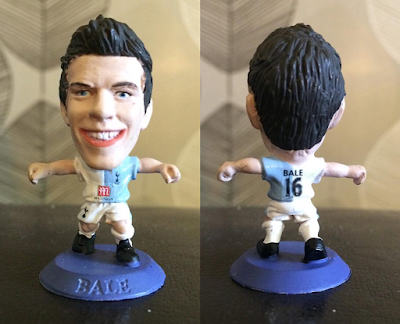 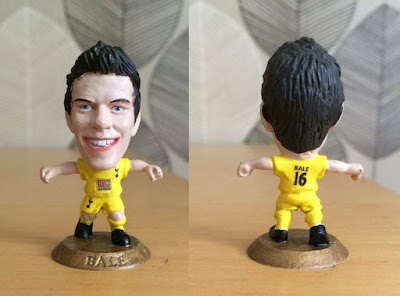 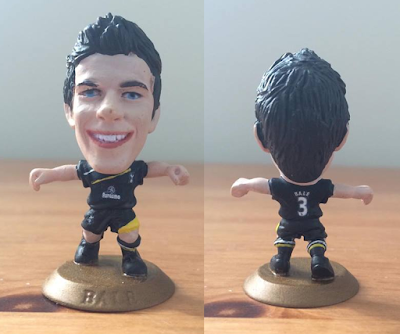 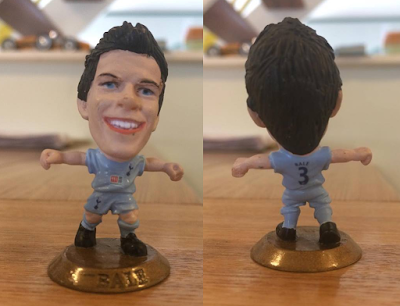 4 photos means I don't need to say anymore, right?!
Posted by Marc's Corinthians at 04:18 No comments:

I'm trying to do a post a day at the moment! Varying the teams, and getting through some of the backlog of photos! 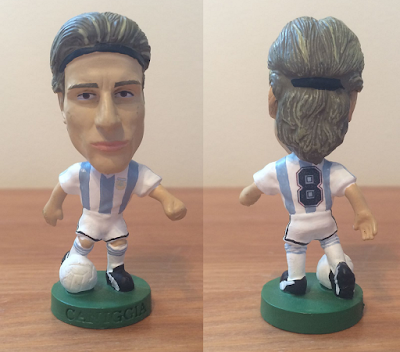 Some things I have learnt from doing this repaint:

Argentina were wearing black shorts when they played Cameroon.

The 3rd guy that fouled him (you know the passage of play I'm talking about!) lost a boot in the process!!

I was pleased with this repaint, and evidently, it was good enough to get me 3 more orders for Caniggia figures!

Posted by Marc's Corinthians at 09:27 No comments:

The Sheffield United fan that I've done a few figures for is a massive fan of James Beattie, enough in fact to want a microstar and a prostar version of him.

Of course, I was happy to oblige: 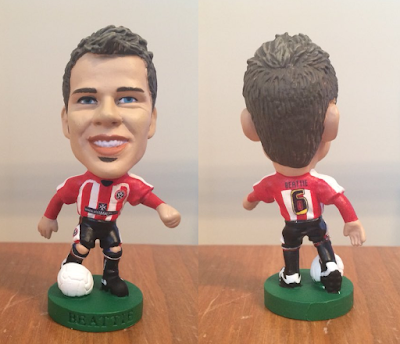 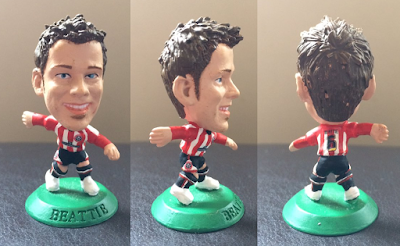 I was pleased with both of these. One thing slightly different than usual about them, is that I painted on top of the decal for the shirt numbers- I felt that the gold outline around the numbers didn't show up as well as I wanted so I carefully added it.

All that extra work for a striker who chose to wear number 6!!
Posted by Marc's Corinthians at 09:59 No comments:

It's been a while since I posted any Tonka figures. When I can, I like to vary the content in terms of team and style of figures... and then sometimes I also go for a month without blogging!

Anyway, here are the next 3. It's actually kits from across 2 different seasons; the reason for this is that the home kit was exactly the same, barring the change of sponsor. Thinking about it the yellow kit (which changed from the away kit to the 3rd kit) was the same, moving from Strongbow to Whyte and Mackay.

Anyway, here they are! 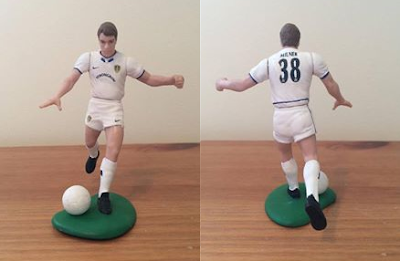 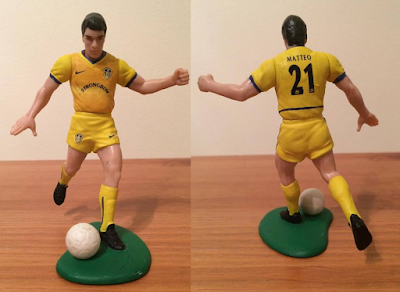 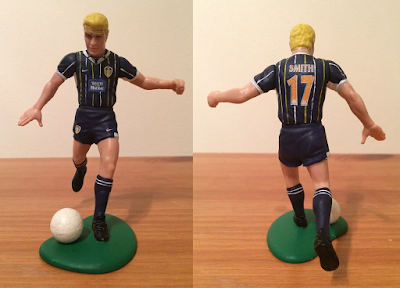 In terms of choosing the players, Milner became the Premier League's youngest ever scorer in the top picture. Matteo seemed as good a choice as any for kit 2, and Smith was one of the only players to perfom in the season we wore the dark kit!

If you look closely at the yellow kit, you will see the fade from a more orangey-yellow, to a lighter one in the middle. I think this is the first time I blended colours on the shirt (more complex example coming soon!) and I was very pleased with how it ended up.

The dark kit divided Leeds fans. It's "Not very Leeds" was an argument I often heard, and I think I'm right in saying we didn't win a game in it!! I liked it, for what it's worth! I also enjoy the challenge of a kit with pinstripes!

Posted by Marc's Corinthians at 02:59 No comments:

Well, my laptop is back from the repair shop!! In truth this only partly explains the huge gap between blog posts, but what better way to celebrate getting it back than with... a new blog post!

Here are some Diego Maradona repaints: 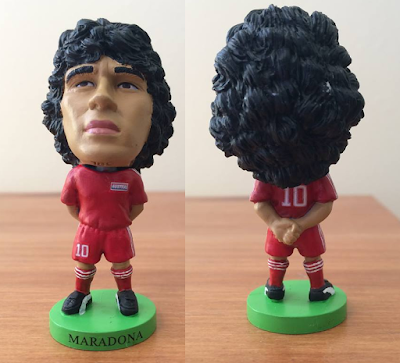 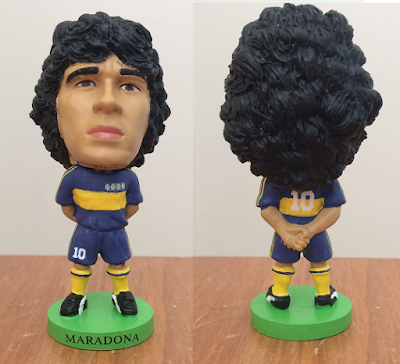 The two teams are Argentinos Juniors, and Boca Juniors.

Clearly the absence has not adversely affected my ability to write sharp and to the point blog posts...

Posted by Marc's Corinthians at 08:22 No comments: